For the Builder Base building with the same name, see Ágyú/Építői bázis 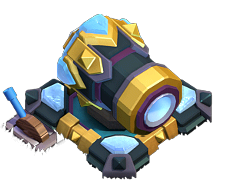 "Cannons are great for point defense. Upgrade cannons to increase their firepower, but beware that your defensive turrets cannot shoot while being upgraded!"