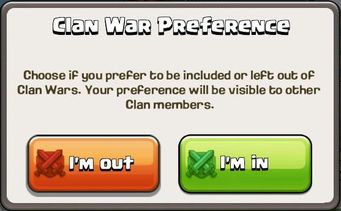 The Player Profile is a summary of a player's information available to all players.

There are various ways to view a Player Profile. One way is to click on a player's name and choose the

option (this can be done wherever the player's name appears, such as from a battle log, or from a Clan's member list). To view your own profile you can click on the blue button that contains the experience level, or if you are in a Clan, you can access the profile from the member list or from your messages in Clan chat.

These pieces of information are common to both tabs and can be viewed on either tab.

These pieces of information only appear in the Home Village tab:

If the player has finished a season in Legend League at some point, an extra set of information marked "Legend League Tournament" relating to their performance in the Legend League is present (see image to the right). From left to right:

Info exclusive to the Builder Base tab Szerkesztés

These pieces of information only appear in the Builder Base tab:

If the player has finished a season above the season reset at some point, an extra set of information marked "Versus Battle Tournament" relating to their performance in Versus Battles is present (see image to the right). From left to right:

Players can display up to three labels at any one time. A player may edit these labels by tapping the green pen button next to them when viewing their own profile.

These labels can be set to show a player's preferred playstyle; for example, someone who likes to participate in Clan Wars can set a "Clan Wars" label for themselves.

The labels can be used by Clans to recruit new members; recruiters can filter out players by their chosen label(s) when doing such a search. When viewing any player profile, the labels themselves can be tapped to show their meaning.

Below the basic information you will see the player's current progress for each achievement available in the game. This information includes the number of stars the player has earned as well as their numeric progress toward the next level (or lifetime total, if applicable, if they have already reached three stars).

Note that 'lifetime achievement totals' are only kept since the "Player Profile" update was released on 27 August 2013. If a player completed an achievement before that date, his/her lifetime total was set to the maximum achievement completion amount and then began to grow from there.

Listed below are the achievements. Achievement totals marked with an asterisk (*) are possibly under-reported due to the issues described above.

To change your name, go to your game settings from the main screen in the bottom right. Click "More Settings", and in this screen there will be the "Change Name" button. Once clicked, a box will popup instructing you to input and change your in-game name. Simply enter the new name you’d like, select continue, and you’re all done.