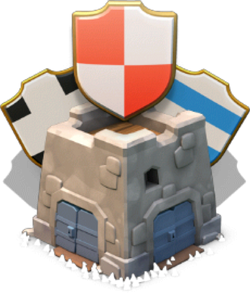 Clans are an optional feature in Clash of Clans, but it is strongly recommended that every player should join a Clan. Collaboration is a very important and helpful aspect of this game.

The player cannot create a Clan while already in another Clan. If the player is already in a Clan, the "Create Clan" tab will be replaced with "My Clan". In order to create a clan, in this case, the player must leave their current clan first.

The player will then be presented with the interfaces as shown in the gallery to the right. To create a Clan, the player needs to do the following;

All of the settings, except for the Clan name, can be changed later by the leader and co-leader(s).

All members of a clan are able to view on the main tab information pertaining to their current clan.

In the My Clan tab, players can be shown the interfaces as shown in the gallery. Both views can be accessed by tapping the two tabs: a tab with the Clan's clan badge on it and a tab with a graph.

Players can also view info screens of other Clans in a similar manner. When viewing another Clan's info screen, a similar screen is found on the Clan tab. Several differences are present: 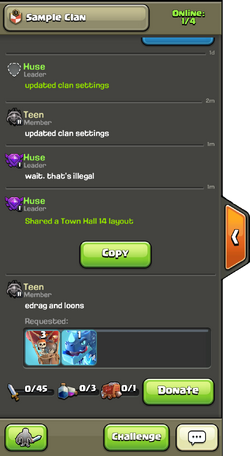 Leaders, co-leaders, and elders can recruit new members by tapping the

button. This button takes the recruiter to the interface shown on the right.

While there, they can browse through a list of players. Tapping a player's entry takes the recruiter to the player's profile.

The recruiter can select up to three labels to narrow the search down to players with relevant labels. This further allows recruiters to find players with a suitable play-style that the clan wants and they can invite a friend in their clan if you want.