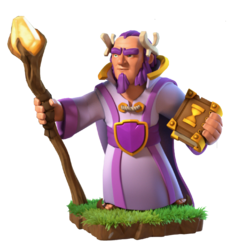 "This veteran battle-scholar seeks out groups of friendly troops to fight behind and boost with his Life Aura, and assumes the form of a tower on defense. Attacking, he can walk over walls or fly high, and can make nearby troops immune to damage once his Eternal Tome ability is unlocked!"