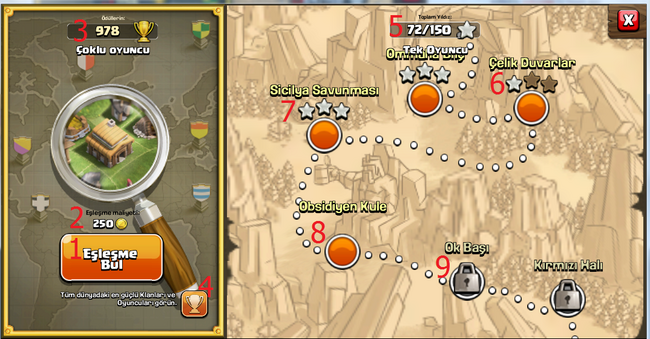 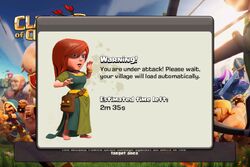 Trophies are awarded upon a multiplayer victory. Victory is determined by how many stars you earn during the raid. There are three stars available to be earned in each battle:

For each star that you earn, you receive one-third of the available Trophies. This means that destroying your opponent's Town Hall gives you an automatic victory. Also it is impossible to get more than one star without destroying the Town Hall. Failure to get any stars means a loss, causing you to lose Trophies.

There is no hard-and-fast rule, but in general the higher your Trophy count the more difficult opponents you will encounter, both those you are matched with to attack as well as those attacking your village. Because of this, many higher level players keep an artificially low Trophy count by intentionally losing battles; in this way they can both make their villages easier to defend (as they will on average be attacked by weaker opponents) as well as ensure themselves less difficult bases to attack for resources.

Fight the goblins in the Single Player Campaign! Each level has a preset amount of loot that can only be earned ONCE, however most of the time you will spend more Elixir on troops than you get as a reward. In addition, most of the villages past stage 16 are quite hard, so you'll have to wait until you're much higher level to complete them. Note that no Trophies can be won or lost in the Single Player Campaign and it will not cancel shields.

The lower levels (1-16) usually have no aerial defenses such as Air Defenses or Archer Towers, allowing easy completion with a single Balloon or Minion. Some levels after level 16 can also be easily completed by taking out their aerial defenses first with ground units, and then using a Balloon or Minion to destroy the rest of the village. Note that using a single air unit in this fashion can take quite some time; in fact, often it will take so long that the game will time out due to inactivity, causing the attack to fail (regardless of how many stars you had earned to that point). To prevent this, pan or zoom the screen every so often, or attack with additional units.

Keep in mind that you can view a level before attempting to raid it. You can do this by simply getting into the battle, then tapping "End Battle". This results in no penalty and allows you to plan your army to easily take out their defenses. Unlike multiplayer battles, there is no time limit when you attack. However, you will not be able to view the village without at least one troop trained in your Army Camp (you do not have to deploy it).

Many players find the higher levels in single-player to require more than one try. For these levels, it can be wise to use higher-level troops such as Wizards, Healers, Dragons, P.E.K.K.As and/or Dark Elixir Troops to complete the level, which often saves more Elixir than attempting the level mutiple times with cheaper units. That being said, raiding the goblins can be quite lucrative once you progress through the hard levels. In fact, some levels can reward you with Gold and Elixir as much as 800,000 each!

It is interesting to note that while the difficulty of the Single Player Campaign increases quite rapidly as one progresses in level, the available loot rises considerably as well. Resources above 300,000 can be found after the level "Choose Wisely".

Army Planning is one of the most important parts of raiding. If your army is not planned out well enough you are probably going to lose, or at most earn one star. Depending on your objective (trophies or resources), you'll have to plan your army according to it.

If you're raiding for Trophies or a balance of Trophies or resources, this army configuration is decent for mid-level players (169 housing space required):

If you're specifically farming for resources and don't care at all about Trophies, a typical army might look like the following (180 housing space required):

Gold and Elixir can be stolen from three types of Resource Buildings: storages, mines/collectors and the Town Hall.

Dark Elixir can be stolen from two types of Resource Buildings: storages and drills.

The same loot multipliers as with Gold/Elixir apply to Dark Elixir as well.