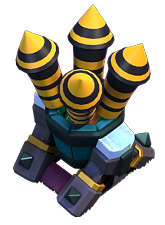 "This anti-air tower is deadly against flying enemies, but can't target foes on the ground. Place it wisely to cover as much airspace as possible."

Input Gold Pass boost to modify the statistics in the tables below accordingly
Retrieved from "https://clashofclans.fandom.com/wiki/Air_Defense?oldid=567674"
Community content is available under CC-BY-SA unless otherwise noted.