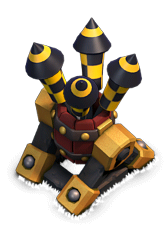 "This anti-air tower is deadly against flying enemies, but can't target foes on the ground. Place it wisely to cover as much airspace as possible."

Retrieved from "https://clashofclans.fandom.com/wiki/Air_Defense?oldid=460592"
Community content is available under CC-BY-SA unless otherwise noted.