For a similar Builder Base Troop, see Sneaky Archer. 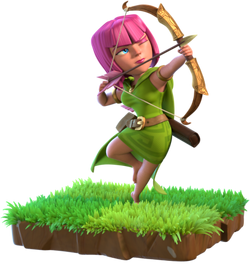 "These sharpshooters like to keep their distance on the battlefield and in life. Nothing makes them happier than single-mindedly taking down their target."

Retrieved from "https://clashofclans.fandom.com/wiki/Archer?oldid=567606"
Community content is available under CC-BY-SA unless otherwise noted.