watch 01:55
Who is Archer Queen?
Do you like this video?
Play Sound 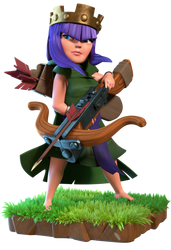 The table below denotes the months in which Archer Queen skins were available. They typically could only be obtained by reaching a predetermined tier of Season Challenges after purchasing that season's corresponding Gold Pass.

¹ The Chinese style skin available in the 2020 Lunar New Year, and once again in the 2021 Lunar New Year (In china,known as " Hua Mulan" , but simply known as Warrior Queen outside of China) was only available through the Shop as a separate purchase; it cost $9.99 USD (or equivalent depending on your country).

Retrieved from "https://clashofclans.fandom.com/wiki/Archer_Queen?oldid=576411"
Community content is available under CC-BY-SA unless otherwise noted.