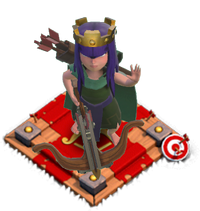 "This graceful huntress is a master destructive force, though modest in health. She snipes targets in her territory when defending, and can summon stealth and terrifying damage when attacking once her Royal Cloak ability is unlocked!"

Input Gold Pass boost to modify the statistics in the tables below accordingly
Retrieved from "https://clashofclans.fandom.com/wiki/Archer_Queen_Altar?oldid=559447"
Community content is available under CC-BY-SA unless otherwise noted.