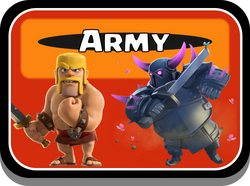 A player's army is used against either the goblins on the campaign map, or against other players in order to win Trophies and loot Gold and Elixir - this is called raiding. There are three main parts to an army: troops, heroes and spells.

Heroes are immortal units that are reusable but require time to regenerate their health when it is lost. They are summoned whenever their respective Altar is constructed or rebuilt. In the Home Village, there are three Hero troops; two use Dark Elixir while the other uses Elixir. In the Builder Base, there is one Hero troop, namely the Battle Machine.

Siege Machines are special weapons that transport your Clan Castle troops. They are built in the Workshop. They only appear in the Home Village. There are three different Siege Machines which are built using Gold.

Retrieved from "https://clashofclans.fandom.com/wiki/Army?oldid=533643"
Community content is available under CC-BY-SA unless otherwise noted.