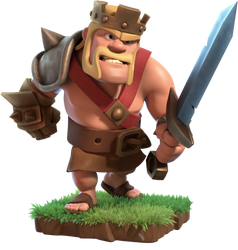 "This colossal menace soaks up huge amounts of damage and bashes anything in his path. He guards his territory fiercely when defending, and can launch into a devastating rage when attacking once his Iron Fist ability is unlocked!"

The below table denotes the months in which Barbarian King skins were available. They are typically only obtainable by reaching the final tier of Season Challenges after purchasing that season's corresponding Gold Pass.

Retrieved from "https://clashofclans.fandom.com/wiki/Barbarian_King?oldid=571197"
Community content is available under CC-BY-SA unless otherwise noted.