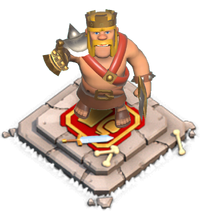 "This colossal menace soaks up huge amounts of damage and bashes everything in his path. He guards his territory fiercely when defending, and can launch into a devastating rage when attacking once his Iron Fist ability is unlocked!"

Input Gold Pass boost to modify the statistics in the tables below accordingly
Retrieved from "https://clashofclans.fandom.com/wiki/Barbarian_King_Altar?oldid=564858"
Community content is available under CC-BY-SA unless otherwise noted.