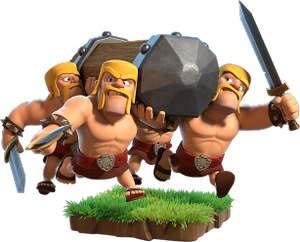 "Four Barbarians holding a big log race ahead to batter down their target, dealing big bonus damage if they connect; then they fight on with their swords!"

Retrieved from "https://clashofclans.fandom.com/wiki/Battle_Ram?oldid=560608"
Community content is available under CC-BY-SA unless otherwise noted.