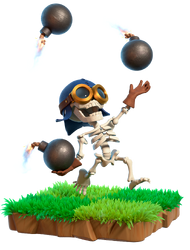 "With an appetite for destruction and high quality special effects, Bombers blow up anything in sight with bonus damage to Walls!"
Gold Pass modifiers

Number of Bomber hits required to break through Walls

Retrieved from "https://clashofclans.fandom.com/wiki/Bomber?oldid=565509"
Community content is available under CC-BY-SA unless otherwise noted.