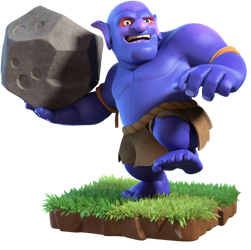 "This big blue dude digs the simple things in life - Dark Elixir drinks and throwing rocks. His massive boulders bounce off their targets and hit again behind it for a double strike!"

Retrieved from "https://clashofclans.fandom.com/wiki/Bowler?oldid=562692"
Community content is available under CC-BY-SA unless otherwise noted.