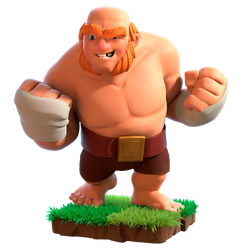 "Heavy-handed and built like an ox, these Giants have been practicing their haymaker punch!"
Gold Pass modifiers

Input Gold Pass boost to modify the statistics in the tables below accordingly
Retrieved from "https://clashofclans.fandom.com/wiki/Boxer_Giant?oldid=564059"
Community content is available under CC-BY-SA unless otherwise noted.