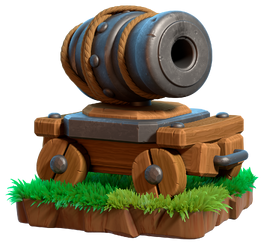 "A cannon on wheels?! Bet they won't see that coming! Tons of firepower, but not that sturdy!"
Gold Pass modifiers

Input Gold Pass boost to modify the statistics in the tables below accordingly
Retrieved from "https://clashofclans.fandom.com/wiki/Cannon_Cart?oldid=565749"
Community content is available under CC-BY-SA unless otherwise noted.