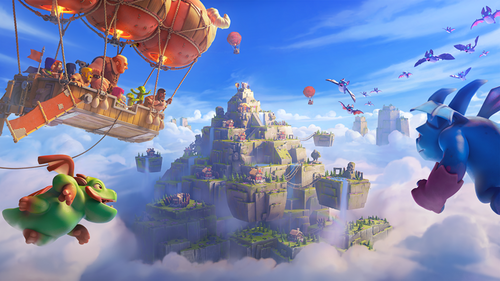 "Welcome, everyone, to Clan Capital; where Clans build together and battle together."

The Clan Capital is a gamemode that involves clans and the members in it.

Members of a clan can contribute to the clan's progress to repair, build and upgrade the Clan Capital. This gamemode is unlocked once the clan reaches level 2, and is available to all players with Town Hall level 6 or above.

"The beating heart of your Clan’s Capital."

"A savage District that smells of meat roasting over an open flame and anger."

"A nexus of unstable magics. Tread carefully lest you get caught up in Wizard’s arcane experimentation."

"Builder’s mountain retreat where he comes to tinker and toil, coming up with all kinds of cooky inventions you can unleash upon your foes."

"Leather wings and squealing hogs makes being in this area for any long duration results in insomnia and tinnitus."

"The ground shakes and shudders with the footfalls of giant stone creations. Only the most advanced Clans can sufficiently handle the unbridled dynamism of this last district."