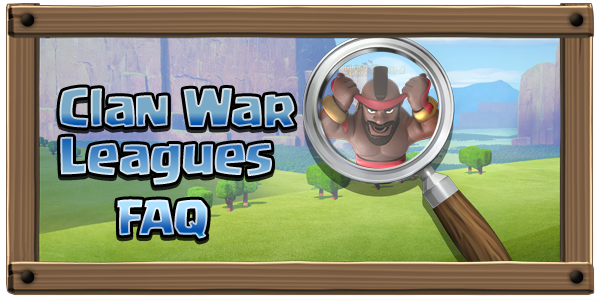 What are Clan War Leagues?

Clan War Leagues is a league structure for Clan Wars. Once a month Clans can sign-up and fight a week of wars with Clans of similar skill level. To participate, Clans have to sign-up for Clan War Leagues with at least 15 (maximum 50) members. It's a good idea to enroll over 15 members to have more attackers to choose from in each War.

At the end of War Week, Clans that have earned the most stars are promoted to higher leagues, while others stay or are demoted. Players get resources and League Medals from their attacks, and have a chance to be awarded bonus League Medals by Clan Leaders.

Clans are randomly matched up against 7 other Clans in their League tier to form a Group. Clans in a Group fight each other and the best performing Clans of each Group can be promoted to a higher League.

Before a Clan has fought in the War Leagues, the skill of the Clan isn't known to matchmaking, and so the initial placing of Clans can be inaccurate. At first it is possible to face both too easy or too hard opponents, but with time the skill levels of the matched Clans will become more equal.

Clans fight a War each day of War Week. Whenever a War goes into Battle Day, Preparation Day begins for the following day's War. Each Preparation Day is a chance for Leaders to finalise the line-up for the upcoming war. They select the line-up of players selected for the Clan War Leagues during the sign-up period.

On Battle Day players have one attack with which they try to collect as many War Stars as possible. Attackers also gain Elixir, Dark Elixir and Gold for the attacks, similarly to regular Clan Wars. If a Clan wins a War, this awards the Clan extra War Stars, that will help them get promoted from their League.

Clan XP from attacks is rewarded from each War in the same way as in regular Clan Wars. However, the loot earned from Clan War League attacks is doubled to compensate for the fact that only one attack per player can be made in each war.

League Medals can be spent in the Shop in the "League Shop" tab.

The Clan Leader and Co-leaders have two days to enter War Leagues with at least 15 (maximum 50) players. The selected players form the pool of players that can be selected to fight on Battle Days.

It's a good idea to enroll more than 15 people into Clan War Leagues to have more players who can do attacks in Wars during War Week.

If the leader so chooses, he/she can choose to do 30v30 wars instead of 15v15 wars if the clan is in Master League or below. The war size cannot be changed midway through the league season, so if the leader plans to do 30v30 wars he/she should be well-prepared with a good roster of players.

Each Clan member can indicate their ability to play in Clan War Leagues with the opt-in/opt-out button in their player profile. Clan Leaders can however enroll players to War Leagues, even if they have opted out of wars.

If a Clan member is included in a Clan's roster of players, he/she can only participate in Clan War Leagues in that Clan and not in any other Clan. He/she can, however, choose to join regular and friendly wars in other Clans that did not sign up for the leagues, but will have to leave for that Clan to do so.

Conversely, if a Clan member is excluded from the Clan's roster, he/she can choose to participate in Clan War Leagues in another Clan that has not signed up. In any case, he/she can still participate in regular and friendly wars in Clans that do not sign up.

Each War Star collected during War Week counts towards a Clan's War Star amount, which in turn factors into whether the Clan is promoted or demoted at the end of War Week. If a Clan wins a Battle Day, they are awarded 10 extra War Stars which helps them get promoted.

If Clans are tied on stars, the total destruction percentage serves as the tie-breaker.

You can see Season statistics by tapping the Season info button in the War Map. Pictures included to the right. 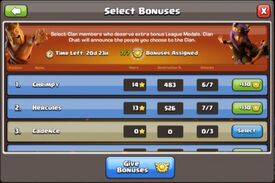 Attacks on Battle Days reward Elixir, Dark Elixir, Gold and Clan XP similarly to regular Clan Wars. For each battle that you win, you earn the chance to receive a war win bonus. The war win bonus is delievered to the Treasury at the end of each War. To get the war win bonus, your clan has to win the Clan War of that day.

League Medals are awarded to everyone in the roster based on the Clan's performance in the League and the number of stars that they have scored in the League. Scoring 8 stars will award the player with the full reward, while scoring less will mean the reward is reduced.

Clan Leaders can also reward Clan members with bonus League Medals. Each war that the Clan wins increases the amount of players eligible for the Bonuses by one.

The Bonuses have to be distributed within 21 days of the Clan's War Week ending. The size of a bonus as well as how many people it can be given to depends on the Clan's League during War Week. For every War that the Clan Wins, an additional person can be given bonus League Medals.

The precious League Medals can be put to good use in the Shop in the "League Shop" tab.

What are League Medals?

Players will earn at least a fraction of the Medals simply by being enrolled in the roster. Scoring War Stars will increase the proportion of the Medals you can win; scoring 8 or more stars will enable you to earn the full reward.

Anyone enrolled to Clan War Leagues can also earn bonus League Medals from a Clan Leader. The more war wins the Clan has, the more bonuses the Leader can give out.

League Medals can be spent on various items in a section of the Shop; these range from Gold and Elixir to Magic Items (including Hammers, which can only be obtained by buying them with Medals) and exclusive Decorations.

Only 2,500 League Medals can be held at any one time; if more are earned the excess will be converted to Gems.

NOTE: Everyone enrolled to the roster will receive League Medals at the end of the League. Bonus League Medals can be awarded to anyone who is enrolled into the War Leagues, whether they attack or not and even if they leave or get kicked out of the Clan.

Can I play Clan War Leagues and regular Clan Wars at the same time?

If a player is enrolled to Clan War Leagues in Clan A, he can still play Clan Wars and Friendly Wars in Clan B.

What if a player leaves or is kicked out of a Clan during Clan War Leagues?

For the full FAQ posted by Supercell, please visit https://supercell.helpshift.com/a/clash-of-clans/?p=web&s=clan-war-leagues
Retrieved from "https://clashofclans.fandom.com/wiki/Clan_War_Leagues_FAQ?oldid=540405"
Community content is available under CC-BY-SA unless otherwise noted.