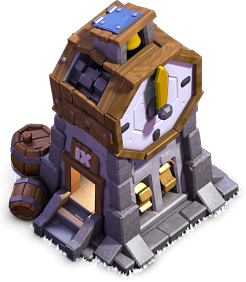 * Relative boost refers to the total time gain as a percentage of 22 hours (the cooldown for a free boost) plus boost duration (added because the cooldown starts countdown after the boost duration), and hence how much faster time will progress in your Builder Base on average. This is assuming that you activate the Clock Tower as soon as the 22 hour cooldown ends, and also assumes that you do not spend any Gems in activating the Clock Tower early.

** The Catch-Up Point of Construction is the minimum number of boosts for which the newly upgraded Clock Tower has equaled the time for upgrading the Clock Tower had it not been upgraded - this does not consider recovering the cost of the Gold required to perform the upgrade.

The formula of Catch-Up Point of Construction time is:

*** The Catch-Up Point of Boost is the minimum number of boosts for which the newly upgraded Clock Tower has provided enough time gain such that the time lost by the inability to immediately use the free boost due to the construction of the Clock Tower is negated. This does not apply to Clock Towers level 7 and below, whose construction time is less than the current cooldown time of 22 hours.

The formula of Catch-Up Point of Boost is:

Retrieved from "https://clashofclans.fandom.com/wiki/Clock_Tower?oldid=570948"
Community content is available under CC-BY-SA unless otherwise noted.