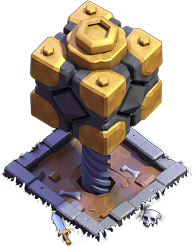 *Exact value as derived from game files. In-game, this is stated as being 2 tiles.

**The splash radius is always centered on the Crusher, unlike most splash defenses whose splash radius centers on the location where the projectile hits.

Retrieved from "https://clashofclans.fandom.com/wiki/Crusher?oldid=562812"
Community content is available under CC-BY-SA unless otherwise noted.