watch 01:24
'Clash Of Clans' Lore: Dark Elixir Drill
Do you like this video?
Play Sound 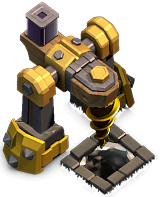 "Our Builders have finally figured a way to extract pure Dark Elixir, the rarest form of the magical substance."

Input Gold Pass boost to modify the statistics in the tables below accordingly
* The Catch-Up Point is the time at which the newly upgraded Dark Elixir Drill has equaled the total production of the drill had it not been upgraded - this does not consider recovering the cost of the Elixir required to perform the upgrade.

Caveat: The Catch-Up Point calculation assumes that the player collects all resources from the Dark Elixir Drill without allowing it to reach its storage capacity, as resource production ceases at that point. This is more of a concern at lower levels where the capacity is limited and Time to Fill is relatively short. If the player is unable to regularly collect and achieve the full potential of the collector, the Catch-Up Point is actually shorter, and performing the upgrade becomes more advantageous.

Retrieved from "https://clashofclans.fandom.com/wiki/Dark_Elixir_Drill?oldid=576458"
Community content is available under CC-BY-SA unless otherwise noted.