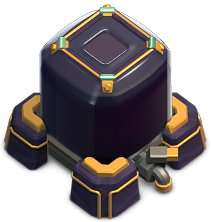 "The power of Dark Elixir could not be contained in a regularly shaped Elixir vat. As it's three times as powerful, we had to invent a cubical form of storage!"

Input Gold Pass boost to modify the statistics in the tables below accordingly
Retrieved from "https://clashofclans.fandom.com/wiki/Dark_Elixir_Storage?oldid=576459"
Community content is available under CC-BY-SA unless otherwise noted.