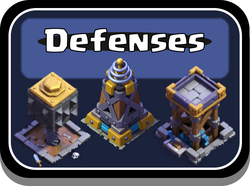 In Clash of Clans, having a strong defense is as important as having a capable offense. Having a good, well-designed defense in the Builder Base is one of the key components to success in Versus Battles.

Defenses serve to protect your Builder Base and prevent as much damage as possible. Each defense has its own strengths and weaknesses, and its location in your village should reflect that. For instance, the powerful Crusher deals loads of damage to groups of units, but it can't attack air troops at all - so it should be placed in the center of your village with adequate protection from Air Bombs and Firecrackers. On the other hand, Cannons and Archer Towers deal lesser amounts of damage to groups (as they can target and hit only one unit at a time) but attack quicker and work as an effective first line of defense.

Retrieved from "https://clashofclans.fandom.com/wiki/Defensive_Buildings/Builder_Base?oldid=537339"
Community content is available under CC-BY-SA unless otherwise noted.