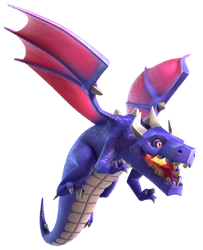 "The might of the dragons are known throughout the land. This scaly terror of the skies feels no mercy and nothing will escape the fiery splashes of his breath."

Retrieved from "https://clashofclans.fandom.com/wiki/Dragon?oldid=576363"
Community content is available under CC-BY-SA unless otherwise noted.