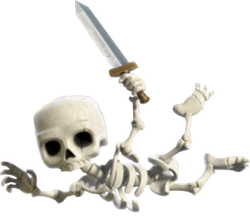 "This undead creature poses little threat by itself. But it never fights alone, since the Drop Ship can throw an endless horde of Skeletons at your enemies!"
Retrieved from "https://clashofclans.fandom.com/wiki/Drop_Ship/Skeleton?oldid=562646"
Community content is available under CC-BY-SA unless otherwise noted.