watch 01:47
What is Eagle Artillery?
Do you like this video?
Play Sound 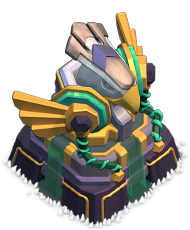 "The Eagle Artillery has nearly unlimited range and targets tough enemies with exploding shells. However, it won't activate until a large amount of troops have been deployed."

The Eagle Artillery undergo significant visual changes at all levels.

*90 individual shots. Each volley comes in three shots, but it's possible to fire only the first one or two shots in a volley.

Retrieved from "https://clashofclans.fandom.com/wiki/Eagle_Artillery?oldid=576446"
Community content is available under CC-BY-SA unless otherwise noted.