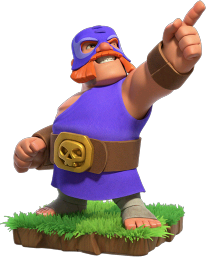 "This mysterious masked fighter seemingly turned up out of nowhere, throwing punches that shatter walls with ease! No one knows his true identity, only that he's strong, he's a man and he brawls for your clan."

Retrieved from "https://clashofclans.fandom.com/wiki/El_Primo?oldid=565447"
Community content is available under CC-BY-SA unless otherwise noted.