Clash of Clans Wiki
Register
Don't have an account?
Sign In
Advertisement
in: Buildings, Resources, Builder Base 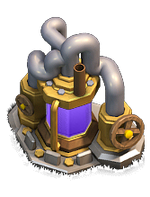 "Elixir is pumped from Ley Lines coursing underneath your village. Upgrade your Elixir Collectors to maximize elixir production."

* The Catch-Up Point is the time at which the newly upgraded Elixir Collector has equaled the total production of the mine had it not been upgraded - this does not consider recovering the cost of the Builder Gold required to perform the upgrade.

Caveat: The Catch-Up Point calculation assumes that the player collects all resources from the Elixir Collector without allowing it to reach its storage capacity, as resource production ceases at that point. If the player is unable to regularly collect and achieve the full potential of the collector, the Catch-Up Point is actually shorter and performing the upgrade becomes more advantageous.