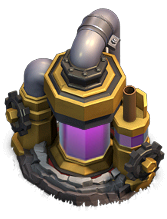 "Elixir is pumped from the Ley Lines coursing underneath your village. Upgrade your Elixir Collectors to maximize elixir production."

Elixir Collector, as it appeared in the shop (old).

Elixir Collector, as shown in a promotional image of level 11 resource buildings update.

Elixir Collector, as shown in the promotional image of 2014 Winter update.

Elixir Collector, as shown in the promotional image of resource boost and donation refund. It can be seen in the left side.

* The Catch-Up Point is the time at which the newly upgraded Elixir Collector has equaled the total production of the collector had it not been upgraded - this does not consider recovering the cost of the Gold required to perform the upgrade.

Caveat: The Catch-Up Point calculation assumes that the player collects all resources from the Elixir Collector without allowing it to reach its storage capacity, as resource production ceases at that point. This is more of a concern at lower levels where the capacity is limited and Time to Fill is relatively short. If the player is unable to regularly collect and achieve the full potential of the collector, the Catch-Up Point is actually shorter and performing the upgrade becomes more advantageous. Or, in easier to understand terms, the catch-up point is the amount of time it would take to get the resources it would have collected if it wasn't being upgraded.