For the Home Village building with the same name, see Elixir Storage/Home Village. 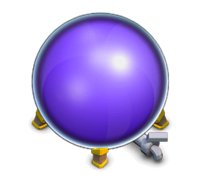 "These storages contain the elixir pumped from underground. Upgrade them to increase the maximum amount of elixir you can store."

Input Gold Pass boost to modify the statistics in the tables below accordingly
Retrieved from "https://clashofclans.fandom.com/wiki/Elixir_Storage/Builder_Base?oldid=559503"
Community content is available under CC-BY-SA unless otherwise noted.