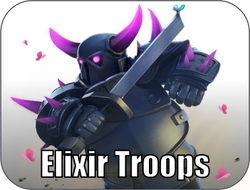 Elixir troops are trained in the regular Barracks. Upgrading the Barracks can unlock more Elixir troops. You can also research Elixir troops in the Laboratory to make them more powerful.

Retrieved from "https://clashofclans.fandom.com/wiki/Elixir_Troops?oldid=542808"
Community content is available under CC-BY-SA unless otherwise noted.