Events in Clash of Clans impact some aspect of gameplay for a limited time. Many events either enable training units or boosting various aspects (resource or army production) at reduced cost, or increase gameplay rewards (e.g. increasing the loot won from Clan Wars). Some events provide tasks that can be completed for additional Experience, Gems and/or Magic Items.

Players can view active and upcoming events in the Events tab accessed through the news button next to the Shop.

From the 2016 Christmas Update on, there have been a continuous series of events in which players can train troops or brew spells at reduced cost for a limited time, although there were also several Events before that Update which didn't reward gems. The troop events function like mini-achievements, in which players need to win a certain number of multiplayer battles, each with a certain number of the said troops, to claim some Experience, Gems, and/or Magic Items. Most Events' discount rates range between 70-90% (i.e. reduced to 10-30% of normal cost) when a single unit is discounted in this manner; if such events discount multiple units at the same time, the discount will often be lower (e.g. 50%).

Using the exact number of the said troops is not required; it's totally OK to use more than the number of the required troops, as long as at least one star is achieved. The troops in the Clan Castle also count for the number of troops, and are essential for players with lower Town Hall levels that can't train the said troops by themselves. If the Town Hall level is low enough such that neither training nor requesting the said troop is possible, a number will still be displayed, but the mini-achievement reward is unattainable unless you rush the building. Also, players can aim for this reward other in-game tasks simultaneously.

For multi-troop events, the reward for each troop is achieved separately, but players can aim for them simultaneously. The requirement for each individual troop is equal to the requirement of that troop's single troop event.

Below is a table about how many troops are needed in each type of event, assuming that the required number of troops is indeed one-fifth of the total Army Camp space.

*Only available as Clan Castle troops.

The Town Hall level might be the sole factor of the troop requirement, regardless of whether or not the Barracks or Dark Barracks (to unlock the said troop), Army Camps and the Clan Castle are at the maximum level possible at the TH level. For example:

In all these events, players get a chance to gain some resources by queuing just before the end of the event and unqueuing after the event ends. Theoretically, an Event of 90% discount on Electro Dragons and Jump Spells will yield the maximum amount of Elixir possible (964,800

) and an Event of 90% discount on Bowlers and Earthquake Spells will yield the maximum amount of Dark Elixir possible (18,561

). For multi-troop events, players can also choose to get a mix of both resources.

The tables below are the number of resources obtainable this way at each Town Hall level, assuming a 90% discount (and no other modifiers from the Gold Pass or otherwise).

These challenges are temporary levels available through the Events tab. Like in Practice Mode, players use a preset army for each level. Players must score 3 stars to earn the rewards, and can earn loot in doing so. There are unlimited attempts, so players can try as many times as they need to successfully 3-star the level. 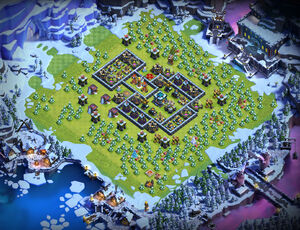 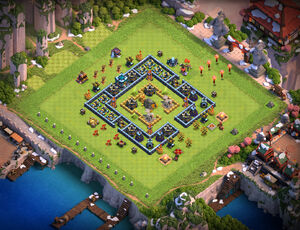 The Dragon cave in the middle of the level contains 10 Bats, 1 Baby Dragon, 1 Dragon, 1 Electro Dragon (all max level) and the Giant Dragon (which also appears in the final level of the Single Player Campaign). Defeating the Giant Dragon earns the Dragon Slayer Achievement if it has not yet been completed. 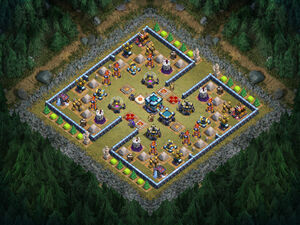 The Clan Castle contains 10 Healers and 2 Super Valkyries (all max level); all defending heroes are also at max level. 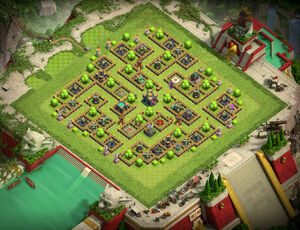 Other notes: The Royal Champion is set to use the Jungle Champion skin. 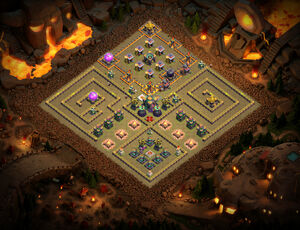 The Inferno Town Challenge appeared in June 2021, immediately after the Summer 2021 update. It showcases some of the new content added into the update, including the Fierce King skin and the Inferno Town Scenery.

The Clan Castle contains a special enlarged version of the P.E.K.K.A, known as the M.E.G.A.P.E.K.K.A, that is capable of doing very high damage (~10,000 damage per hit, enough to one-shot everything provided in the army except the Barbarian King). 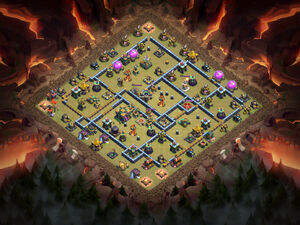 The Clash Worlds June Qualifier Challenge appeared in July 2021, and challenges the player in attacking the war base of eVe Karlito of Team Elevate with the army of Mechuo of TOMPINAI EMPIRE, as was done in the World Championship June Qualifier Finals.

Other notes: The enemy Clan Castle contains 3 Archers, 2 Headhunters and a Lava Hound. The Barbarian King, Archer Queen, Grand Warden, and Royal Champion are set to use their default skins for this challenge.

Deutsch
Community content is available under CC-BY-SA unless otherwise noted.