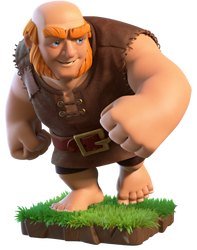 "These big guys may seem calm, but show them a turret or cannon and you'll see their fury unleashed! Slow yet durable, these warriors are best used to soak up hits."

Retrieved from "https://clashofclans.fandom.com/wiki/Giant?oldid=442803"
Community content is available under CC-BY-SA unless otherwise noted.