watch 01:45
Clash Of Clans Giant Cannon
Do you like this video?
Play Sound 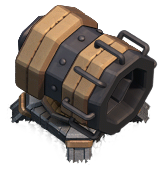 "Nothing gets in the way of the Giant Cannon. It's mammoth-sized cannon balls push past anything and keeps going and going and going..."
Gold Pass modifiers

Input Gold Pass boost to modify the statistics in the tables below accordingly
Retrieved from "https://clashofclans.fandom.com/wiki/Giant_Cannon?oldid=576484"
Community content is available under CC-BY-SA unless otherwise noted.