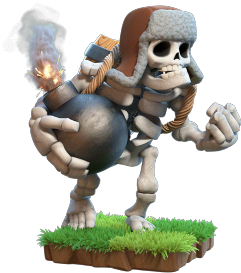 "Big boned from early age, the Giant Skeleton was always destined to blow up more than just walls. His massive bomb damages everything around him after he is destroyed."

*The "level" here does not match up with the in-game levels. This is for purposes of clarity between different Town Hall levels, which have different statistics.

Retrieved from "https://clashofclans.fandom.com/wiki/Giant_Skeleton?oldid=574773"
Community content is available under CC-BY-SA unless otherwise noted.