For the Builder Base building with the same name, see Gold Mine/Builder Base. 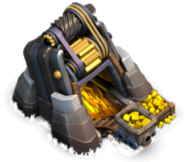 * The Catch-Up Point is the time at which the newly upgraded Gold Mine has equaled the total production of the mine had it not been upgraded - this does not consider recovering the cost of the Elixir required to perform the upgrade. Or, in easier to understand terms, the catch-up point is the amount of time it would take to get the resources it would have collected if it wasn't being upgraded.

Retrieved from "https://clashofclans.fandom.com/wiki/Gold_Mine/Home_Village?oldid=576454"
Community content is available under CC-BY-SA unless otherwise noted.