For the Home Village building with the same name, see Gold Storage/Home Village. 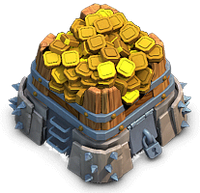 "All your precious gold is stored here. Don't let sneaky goblins anywhere near! Upgrade the storage to increase its capacity and durability against attack."

Input Gold Pass boost to modify the statistics in the tables below accordingly
Retrieved from "https://clashofclans.fandom.com/wiki/Gold_Storage/Builder_Base?oldid=562307"
Community content is available under CC-BY-SA unless otherwise noted.