watch 02:14
Who is Grand Warden?
Do you like this video?
Play Sound 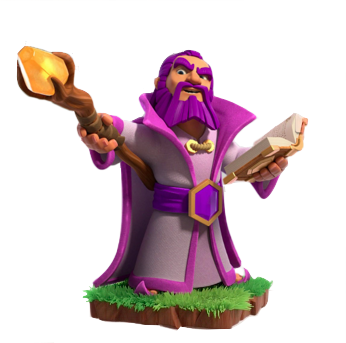 "This veteran battle-scholar seeks out groups of friendly troops to fight behind and boost with his Life Aura, and assumes the form of a tower on defense. Attacking, he can walk over Walls or fly high, and can make nearby troops immune to damage once his Eternal Tome ability is unlocked!"

The below table denotes the months in which Grand Warden skins were available. They typically could only be obtained by reaching a predetermined tier of Season Challenges after purchasing that season's corresponding Gold Pass.

*The Party Warden skin was available as the first tier of the Gold Pass, rather than the last. This was likely to allow Gold Pass players to obtain the skin in time for the 7th anniversary of Clash of Clans (which was early in that season).

Retrieved from "https://clashofclans.fandom.com/wiki/Grand_Warden?oldid=571210"
Community content is available under CC-BY-SA unless otherwise noted.