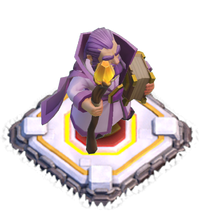 "This veteran battle-scholar seeks out groups of friendly troops to fight behind and boost with his Life Aura and assumes the form of a tower on defense. Attacking, he can walk over walls or fly high, and can make nearby troops immune to damage once his Eternal Tome ability is unlocked!"

Input Gold Pass boost to modify the statistics in the tables below accordingly
Retrieved from "https://clashofclans.fandom.com/wiki/Grand_Warden_Altar?oldid=569332"
Community content is available under CC-BY-SA unless otherwise noted.