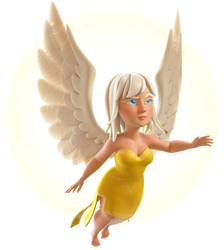 "This majestic creature lives to protect and aid her fellow troops. Any army is improved with her healing support, but make sure to protect her from air defenses!"

The table below shows the effectiveness of adding another Healer when multiple are healing the same target(s).

Retrieved from "https://clashofclans.fandom.com/wiki/Healer?oldid=571242"
Community content is available under CC-BY-SA unless otherwise noted.