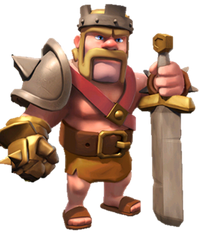 Hero troops are the most powerful troops in the game. They are also immortal, meaning you only have to train them once. However, if they are defeated they must regenerate in order to fight again.

Retrieved from "https://clashofclans.fandom.com/wiki/Heroes?oldid=50894"
Community content is available under CC-BY-SA unless otherwise noted.