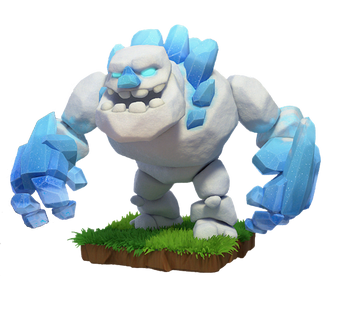 "The Ice Golem has a chilling personality and absolutely zero sense of humor. He frosts over everything he touches, freezes his surroundings when destroyed and ices up when talked to at a party. On defense his freeze effect is smaller and has a shorter duration."

*Freeze radius when used on offense (i.e. to attack enemies). When defending in a Clan Castle, the freeze radius is 5.5 tiles.

Retrieved from "https://clashofclans.fandom.com/wiki/Ice_Golem?oldid=576377"
Community content is available under CC-BY-SA unless otherwise noted.