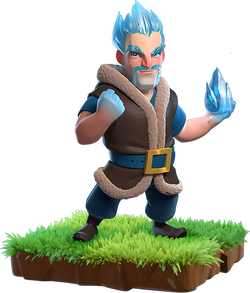 "This Legendary wizard slows down enemy defenses with destructive shards of ice!"

*The statistics for level 1 can be seen at lower Town Hall levels, but since Town Hall 5 is required to unlock the Barracks level that trains Ice Wizards, this level is effectively unused.

Retrieved from "https://clashofclans.fandom.com/wiki/Ice_Wizard?oldid=565247"
Community content is available under CC-BY-SA unless otherwise noted.