watch 01:43
What is Inferno Tower?
Do you like this video?
Play Sound 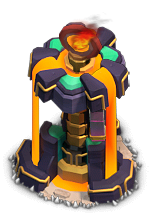 "Set the Inferno Tower's Dark Elixir fueled flame to build up unbelievable damage to single targets, or to constantly roast multiple targets at once."

Retrieved from "https://clashofclans.fandom.com/wiki/Inferno_Tower?oldid=576445"
Community content is available under CC-BY-SA unless otherwise noted.