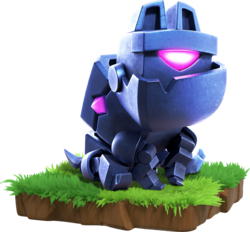 "The trustiest hound to ever roam the village proper, L.A.S.S.I chases enemies with unrelenting fury. Unless they fly, in which case she just observes them intently."

Retrieved from "https://clashofclans.fandom.com/wiki/L.A.S.S.I?oldid=576432"
Community content is available under CC-BY-SA unless otherwise noted.