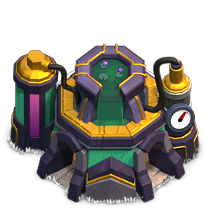 "What dark secrets do these Wizards hide inside their Laboratory? Nobody has dared to look. All we know is that their research makes our spells and troops harder, better, faster and stronger!"

The following charts list the level of the Laboratory on the top and the unit/spell you can upgrade on the left. Each cell contains the level of the unit/spell you can train, how much it costs in elixir, and how long it takes. For example, Laboratory level 3 allows you to upgrade your Archers to level 3 for 250,000 Elixir and it takes 1 day. The top chart contains Elixir troop upgrades while the bottom chart contains Dark Elixir upgrades. Certain troops and spells don't have new levels unlocked at certain laboratory levels and are represented by ' - 's. For example, there's no new level of Goblin unlocked at Laboratory level 2, however you can upgrade it from level 1 to 2 with a level 2 (or higher) Laboratory if you didn't upgrade it when you had a level 1 Laboratory.

Those indicated by *(italics) show that certain items do not need the Laboratory fully upgraded to gain in levels. Those items are accessible by a lower Laboratory once the Town Hall and any other upgrade criteria is met. For example, a level 1 Laboratory can upgrade the Lightning Spell once the other requirements of Town Hall 5 and Spell Factory (level 1) are met.

Note that for the interest of keeping this table compact, abbreviations for costs are used. K and M stand for thousand and million, respectively.

Retrieved from "https://clashofclans.fandom.com/wiki/Laboratory?oldid=572561"
Community content is available under CC-BY-SA unless otherwise noted.