watch 01:37
What is Lava Hound?
Do you like this video?
Play Sound 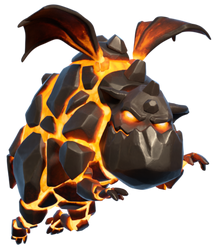 "These fiery beasts can't resist chasing after Air Defenses, providing excellent protection for other troops. Once destroyed, they erupt into many smaller, weaker menaces."

Retrieved from "https://clashofclans.fandom.com/wiki/Lava_Hound?oldid=570902"
Community content is available under CC-BY-SA unless otherwise noted.