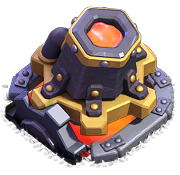 "Hurls molten rock over great distances. Sets the ground on fire, which really turns up the heat for enemy ground troops!"

Input Gold Pass boost to modify the statistics in the tables below accordingly
Retrieved from "https://clashofclans.fandom.com/wiki/Lava_Launcher?oldid=576486"
Community content is available under CC-BY-SA unless otherwise noted.